“Our Workshop” Empowers Members Through Creativity and Upcycling 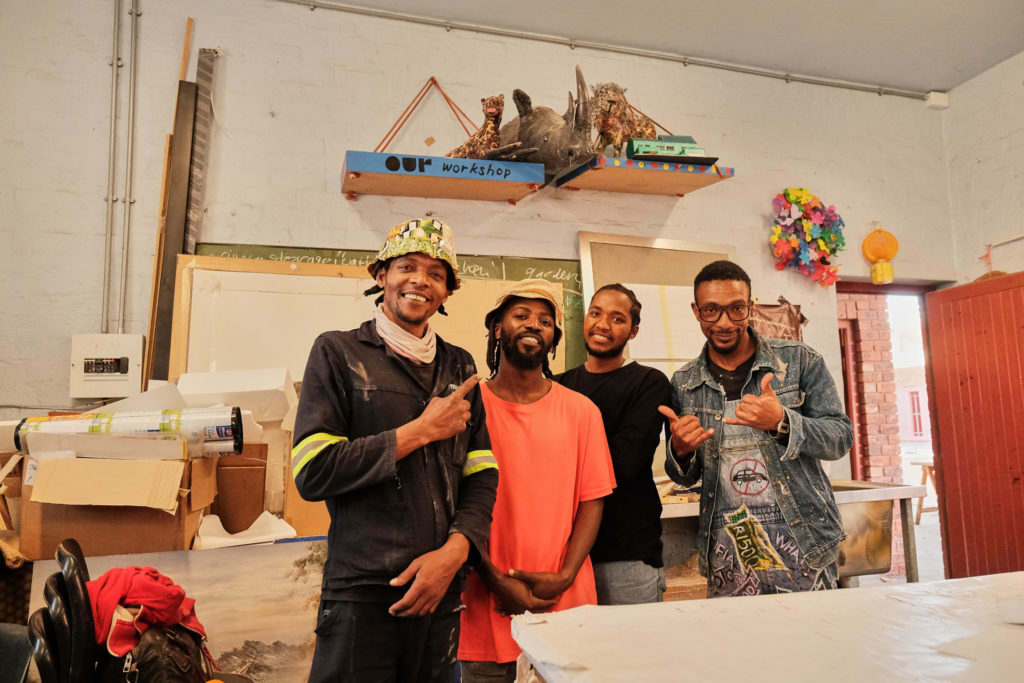 The Langa-based NGO offers its members free access to tools, materials, and internet to grow their creativity.

Located in Cape Town’s Langa township is the Guga S’thebe cultural centre. The brightly coloured building is dedicated to empowering the people of Langa by encouraging entrepreneurship and supporting arts and culture in the area. The centre, which is surrounded by mosaic-covered walls, offers several services designed to assist small business owners, a community theatre for choirs and dancers, and a few small studios for ceramics, mosaics, and dance. It is one of these studios that Our Workshop calls home.

Founded in 2016 by designer and artist Heath Nash, Our Workshop is a non-profit organisation aimed at increasing intercultural connections in Cape Town with a focus on upcycling. The idea for Our Workshop evolved from Heath’s earlier projects that began after he completed his studies in Sculpture at Michaelis, with his 2004 range of upcycled lighting design he titled “Other People’s Rubbish” earning him recognition in the design world. While he had to end this business because the market wasn’t ready to pay the product’s worth yet, this led to him starting a project similar to Our Workshop with support from the British Council. “[It] was about creating spaces for people to run workshops with a library, tools, materials and free access. That ended but I saw it as a great deal of potential so I started Our Workshop as a continuation of what I was doing,” Heath explains. 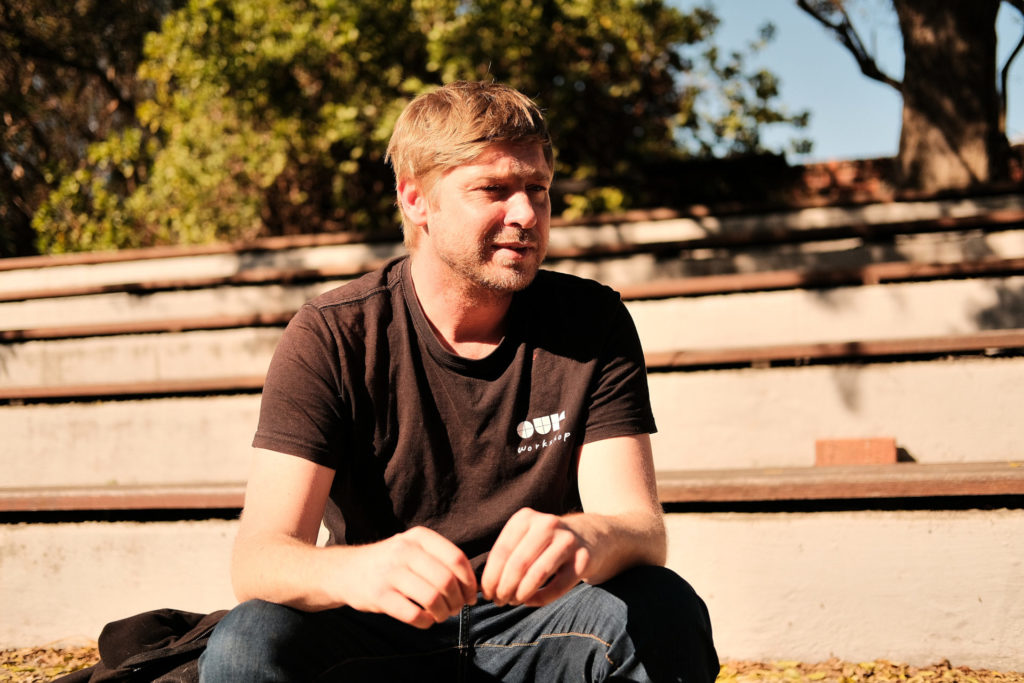 While Our Workshops home was initially in Cape Town’s CBD on Harrington Street, Heath soon realised that due to Cape Town’s geography the people he was trying to connect with struggled to get there, especially as most of the events were at night. “When we got the chance to move in [Guga S’thebe] we jumped at it. Suddenly there was a group of really cool, young black people who just arrived, so I didn’t have to advertise,” Heath recalls adding that “the policy [at Guga S’thebe] used to be one artist, one key, one room, incredibly wasteful. We wanted to experiment and learn a new way of doing things by allowing multiple members to use the same space. We’re the only place still standing so it’s been a successful experiment.” 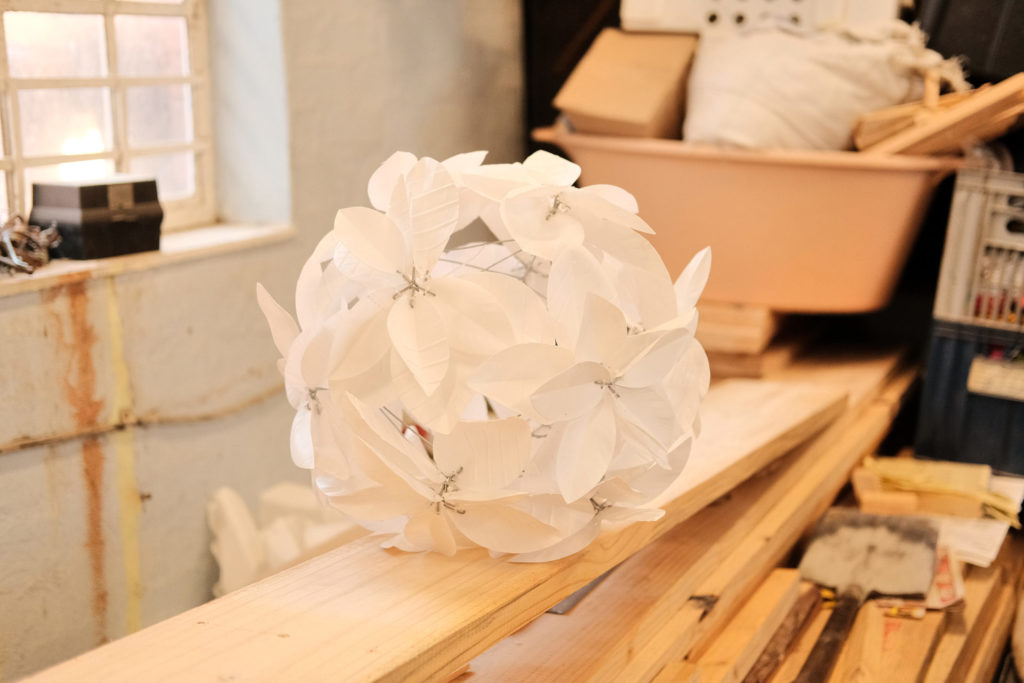 At Our Workshop the space is free, the tools are free to use, materials are donated mostly or scrap materials and the internet is also free. Explaining the reasoning behind this decision Heath says “once we moved into the township we’ve been learning a lot about what emerging creatives need and it’s data, space to make things, tools, and materials.” Having previously relied on capped internet, switching to Ikeja has also helped Our Workshop streamline the business side of things, allowing members to work from the studio with uncapped internet access.

With up to 15 members sharing the studio, everyone has to do their part for it to work. “In the beginning I wanted it to be open to as many people as possible, but that wasn’t practical because we’d been building it as a group and as flatly as possible so we’d make decisions together and one of the most important things is a sense of trust and honesty. And you can’t just allow anyone in if they don’t understand the central core beliefs of the space. So it’s been a long and difficult journey because you’ve got intercultural stuff but mostly interpersonal stuff and it’s a wild ride,” Heath says with a laugh. 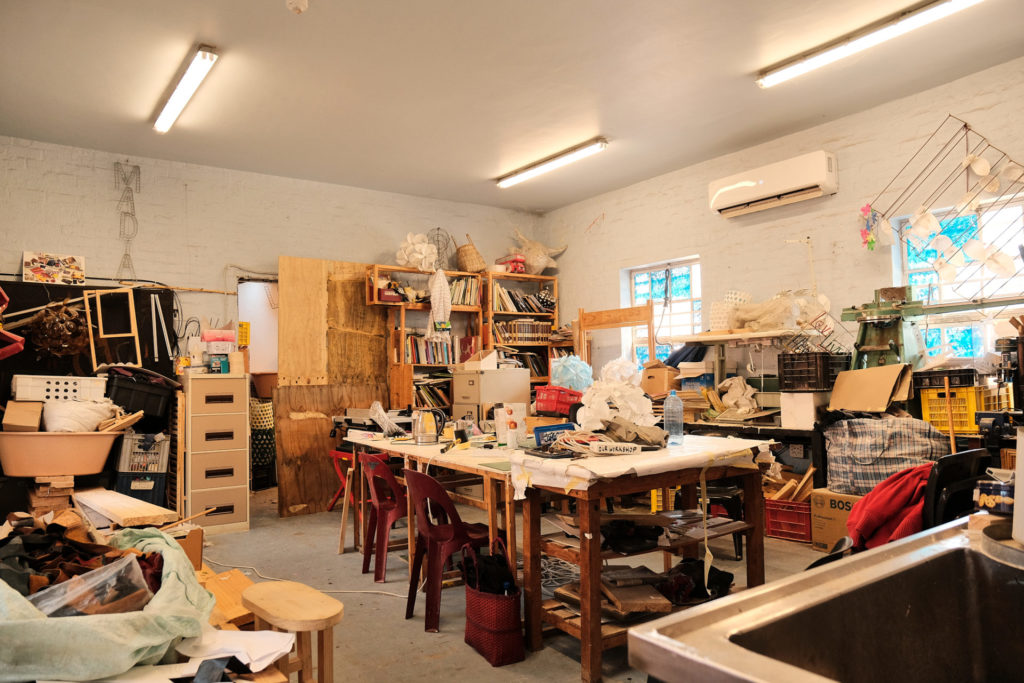 At Our Workshop, they don’t follow a traditional teaching methodology, rather encouraging members to learn by doing and through copying each other, with mentorship rather than lecturing the focus. And while members are encouraged to express their creativity, with the arrival of the pandemic, which ended all tourism to Guga S’thebe and thus their sales from the space, they have also been encouraged to think more about product development and starting their own business. Thanks to Our Workshop’s high-speed WiFi they were able to stream a 5-day training session about product development and entrepreneurship in the studio and to date approximately 10 members have already started their own business.

These members include the likes of Luvuyo Mpoza, a bin-cleaner from Langa, who met Heath in 2017 buying plastic bottles in Langa, which piqued his curiosity, resulting in him being invited to find out about Our Workshop’s upcycling work. With no artistic background, Luvuyo first dove into Our Workshop’s library learning about paper mache, before moving on to African beadwork, then creating his own drawing charcoal, before finding his niche using Tetra packs and milk cartons to create anything from bags to wallets. 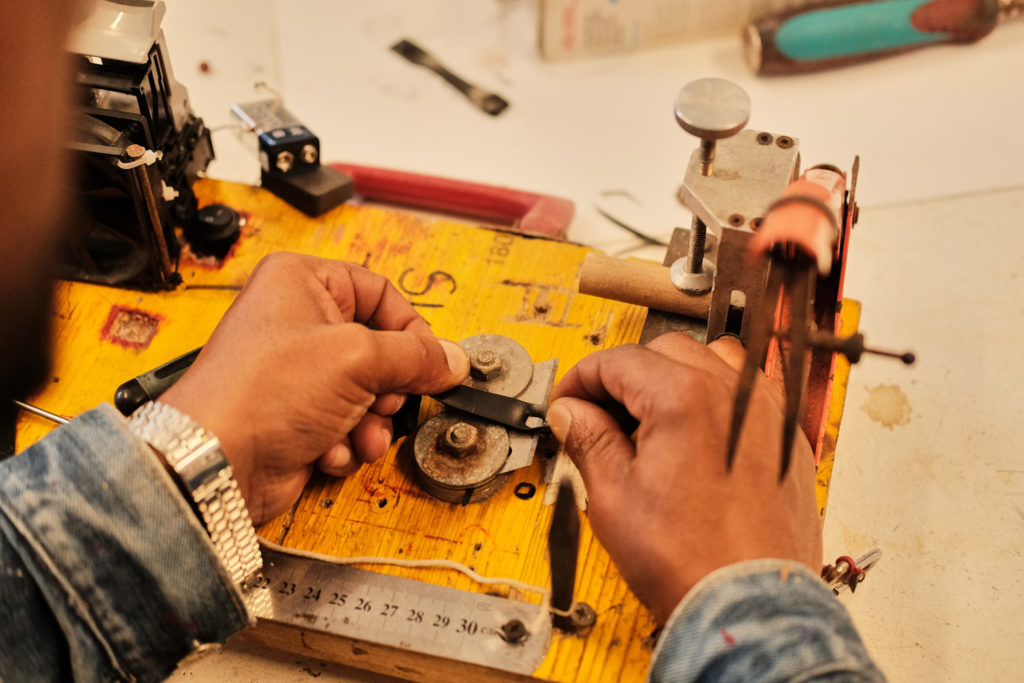 Luvuyo’s visit to AfrikaBurn in 2019, specifically the landscape, inspired his next project which saw him sow leather offcuts into big sheets. He has also begun sowing Tetra packs into sheets which can be used for insulation in shacks or as blankets. “I’m donating them to people because it’s cold in the shacks and people aren’t working now so they don’t have money to buy ceiling boards,” explains Luvuyo about the Tetra pack sheets.

Being a member of Our Workshop has taught Luvuyo a lot working with others. “It’s a chaos of 10 to 15 people with different backgrounds, understandings, hearing! So you just have to be patient, people have different tempos,” he laughs while adding, “on the creative side you get inspired by watching what the other people are doing and incorporating that into your stuff or collaborating with them. I’ve noticed the items we’ve collaborated on are the ones that sell the most!”

Apart from access to tools and materials, he also gets a lot of use out the internet at the studio. “ The internet here is really useful. You need the internet daily for social media. It also helps during lockdown because most people are on their phones, now you’re connecting with people in Germany face to face! It’s painful when you have to leave,” notes Luvuyo. 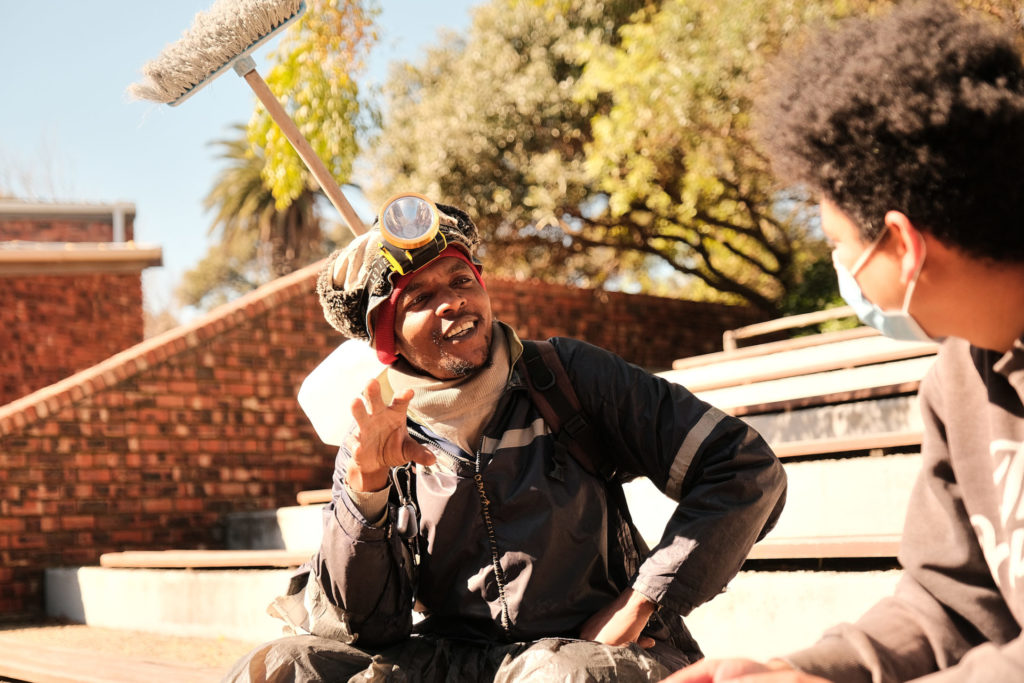 Another challenge he faces is funding even when people are interested in a project. “People undermine your skill and won’t pay your worth. People love the ideas but don’t want to pay the money!” Still, Luvuyo finds joy in the fact that people are recognising him and the other members for their work, such as when their faces were displayed at the Watershed along with the lighting display they had created.

Another member who has found the perfect space for his creativity is Sizwe Shumane who moved to Langa from the Eastern Cape in 2010 and joined Our Workshop in 2017. “I was a member of another organisation in town and someone told me about Heath, so I went and found Heath in town and then Our Workshop,” recalls Sizwe. A long-time creative, Sizwe had already been involved in crafts, art, painting, sculptures, and upcycling before joining Our Workshop, making the organisation a great fit for him. Using wire plastic, Sizwe creates animals, and he also makes rings, necklaces and earrings out of computer keyboards using his own hand-made assembly machine. The internet access is great for Sizwe as it means he can quickly look up designs if he requires inspiration. While he also markets his products on Instagram, Sizwe’s goal is to have a shop in order to better reach customers. 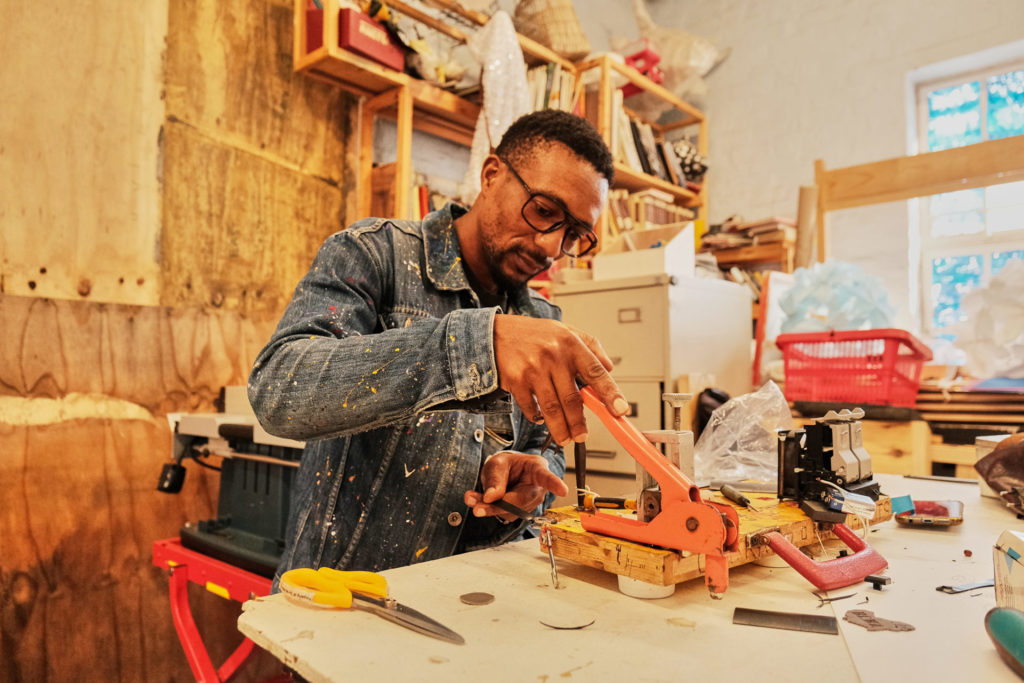 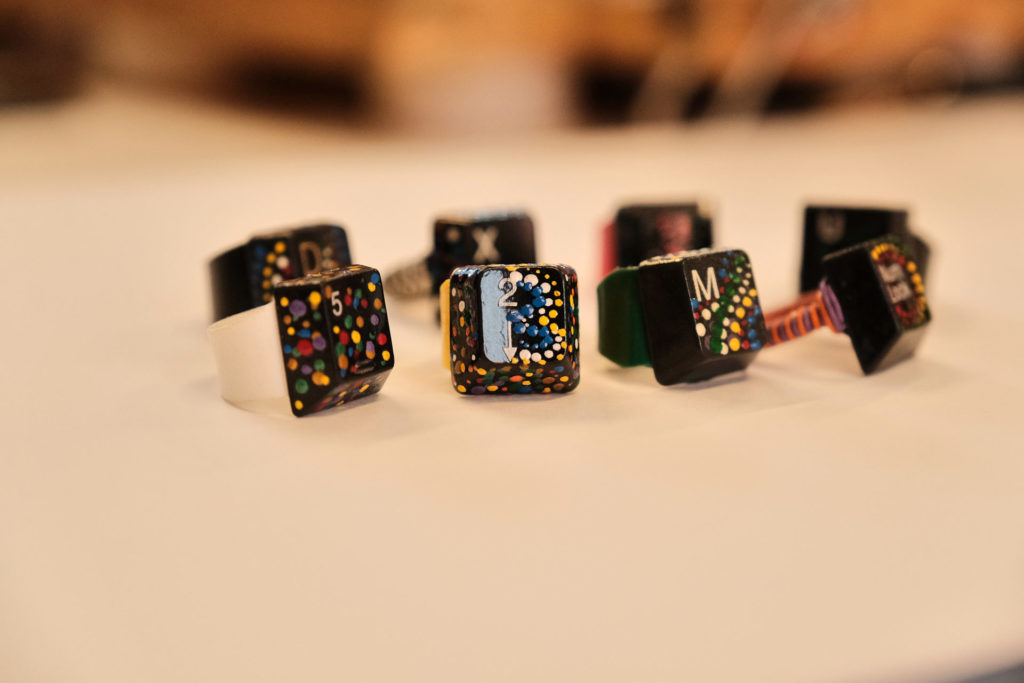 Mpilo Headman is another who has gained a lot from Our Workshop. A member since 2019, he had always known about Our Workshop but didn’t go because of school until his schedule allowed it. ”In my second year of IT, I had free time because I was doing it part-time so I decided to join Our Workshop,” he notes. With a focus on accessories, Mpilo creates everything from bags, to fanny packs, keyring holders, and pencil cases. “I use anything we find, cut-off donations, old denim jeans for bags,” he explains of his process.

For Mpilo, being a member of Our Workshop has given him a lot, including access to tools and ideas. “I don’t have a good quality sewing machine at home or any space to do a lot. Here it’s much easier. And you get to meet people and share ideas and those become bigger ideas than you thought it was. It’s not only about the tools and the space but the people you spend time with, notes Mpilo gladly.

Mpilo is also appreciative of Our Workshop’s move to Ikeja, which was a game-changer in terms of internet access. “We used to have capped WiFi. It was 10-15 of us all using it at the same time and it never lasted that long, now it’s whatever. I can find inspiration online. Sometimes I’ll just come to watch YouTube and be on the internet,” adding that it’s also helped his business. “I started a new account for a business I started up. I was able to register online for the business and pay online. I only had to go in to sign.“ 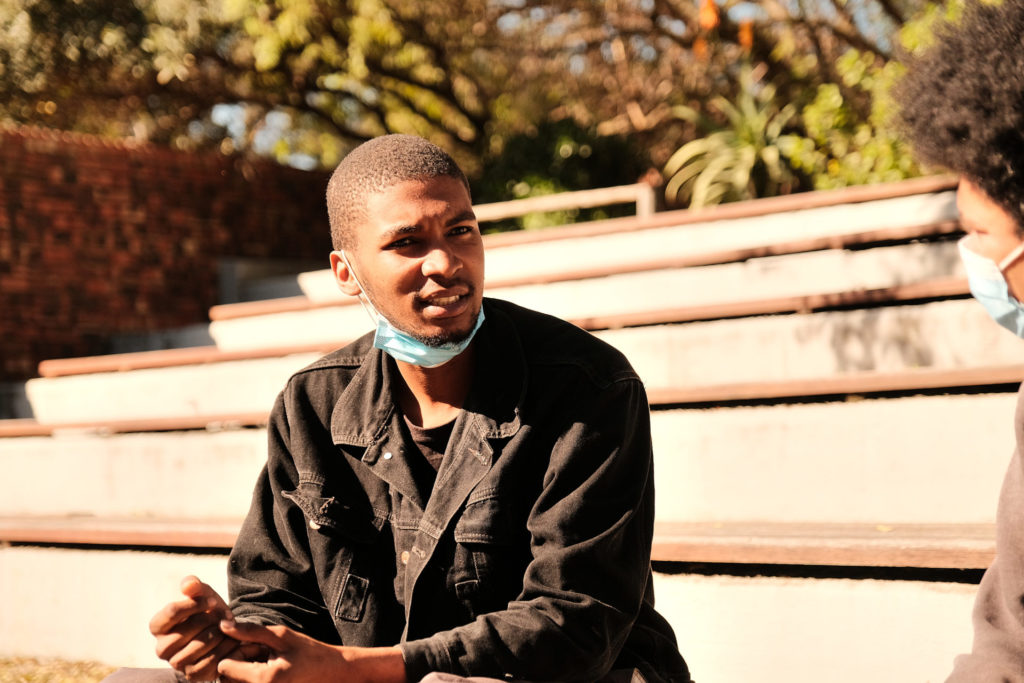 Xolani Nojekwa is another member who has grown thanks to his involvement with Our Workshop. Invited by a friend in 2019, Xolani has always been artistic, drawing and painting since he was a child, leading his mother to proclaim that he was going to be an artist. “I didn’t even know what that meant!” After going to study Xolani realised in his second year that he has a passion for fashion design and decided to pursue it with his label Misunderstood.

Currently, Xolani is working on his collection entitled “From Nothing to Something” which sees him using old denim jackets and pants, enhancing them with the materials donated to Our Workshop. “I use cut-offs from fabrics and leather to make the jackets more colourful and creative. Basically, the whole collection is about making something out of nothing. That’s why I’m using these cut-offs,’ explains Xolani. 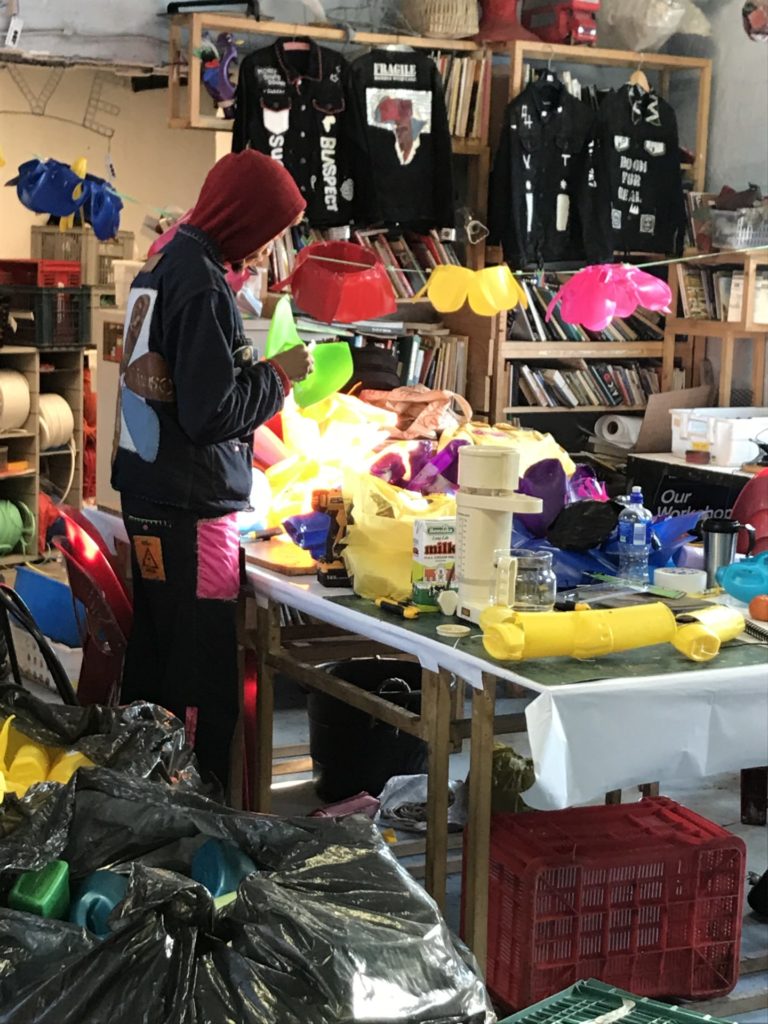 Being a member of Our Workshop has helped Xolani realise that he can also pursue his passion for art. “For me, art was a hobby and fashion design was a career. Now I realise there’s nothing wrong with having two careers, he explains, adding that being a member also inspires him. “I like the fact that we speak the same language here, we lift and inspire each other’s work. Also when we do projects together like at the Waterfront. It’s been really great.”

While Xolani uses the internet for research into what is trending as well as marketing his products, he does find it tough not having the budget to do the marketing efforts he wants to, or a team to assist him. Still, this won’t hold him back and he’s working hard at achieving his goals. “Short-term I want to finish my collection and the rollout and long-term I want to showcase my stuff at art galleries and fashion week, also outside the country, outside the continent, like Paris fashion week, and meet my idols like Virgil Abloh and Kanye West.” 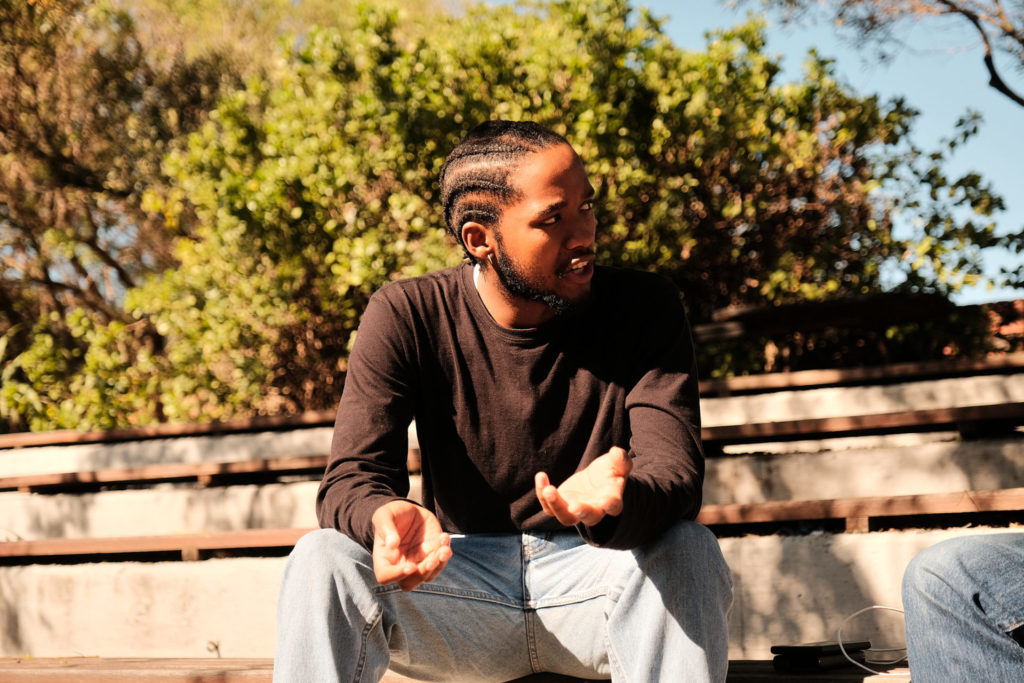 Clearly then, members gain a lot from their involvement with Our Workshop but with no external funding, for it to operate, the organisation has a sister company called Our Workshop Projects through which the members work together to create projects for private and corporate clients. These include chandeliers featuring colourful flowers made out of plastic bottles for the V&A Waterfront’s Watershed in 2019 and garlands out of rejected PET bottles in 2020, decor made from the 2019 chandeliers for the V&A’s Battery Park in 2020, all white wall light arts for a SAFIM Auction and Afrikaburn E-Topia in 2020, a trash tunnel with Thingking, a multi-coloured stage for Afrikburn at Streetopia in 2019, and a themed camp at Afrikaburn.

These efforts have also led to industry recognition with Our Workshop being awarded the Design With Purpose award at the 2019 Design Foundation Awards. While the work Our Workshop does is not without its struggles, its efforts have resulted in the development and growth of its members and with a possible retail store at the Watershed in their future, may expose them to an even wider range of customers and ensure the organisation’s sustainability. 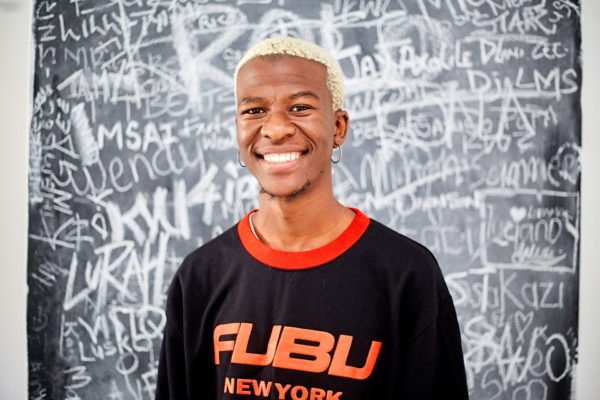 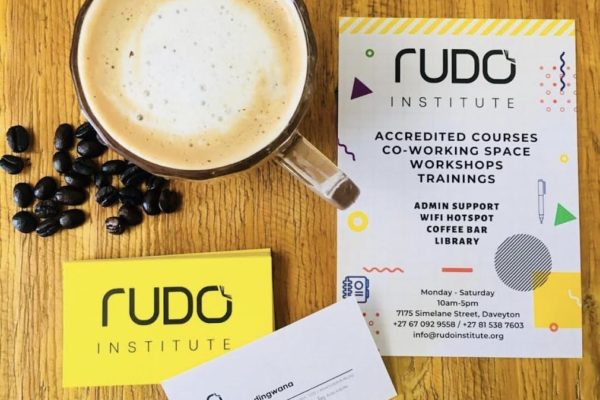 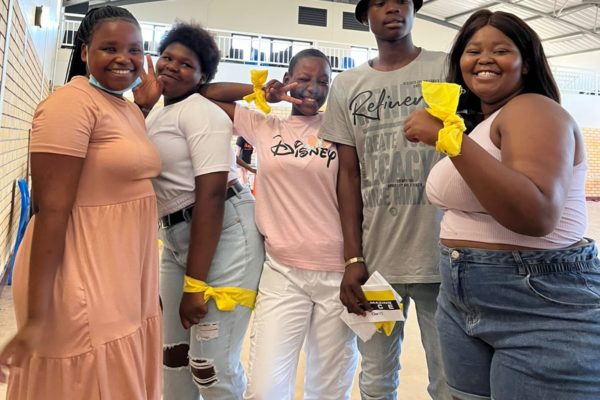